"Unforgeable" means that only the owner of a feed can update that feed, as enforced by digital signing (see Security properties). This property makes Secure Scuttlebutt useful for peer-to-peer applications. Secure Scuttlebutt also makes it easy to encrypt messages.

Building upon Secure Scuttlebutt requires understanding a few concepts that it uses to ensure the unforgeability of message feeds.

An identity is simply a ed25519 key pair. The public key is used as the identifier.

There is no worldwide store of identities. Users must exchange pubkeys, either by publishing them on their feeds, or out-of-band.

A feed is a signed append-only sequence of messages. Each identity has exactly one feed.

Note that append-only means you cannot delete an existing message, or change your history. This is enforced by a per-feed blockchain. This is to ensure the entire network converges on the same state.

Messages can reference three types of Secure Scuttlebutt entities: messages, feeds, and blobs (i.e. files). Messages and blobs are referred to by their hashes, but a feed is referred to by its signing public key.

For private sharing, Scuttlebot uses libsodium to encrypt confidential log-entries. Feed IDs are public keys, and so once two feeds are mutually following each other, they can exchange confidential data freely.

Users choose which feeds to synchronize by following them. Presently, Scuttlebot's replicate plugin, which is enabled by default, looks on the master user's feed for type: contact messages to know which users are currently followed.

Since feeds are append-only, replication is simple: request all messages in the feed that are newer than the latest message you know about. Scuttlebot maintains a table of known peers, which it cycles through, asking for updates for all followed feeds.

The protocol creates a global gossip network. This means that information is able to distribute across multiple machines, without requiring direct connections between them. 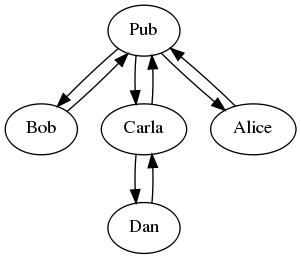 Even though Alice and Dan lack a direct connection, they can still exchange feeds: 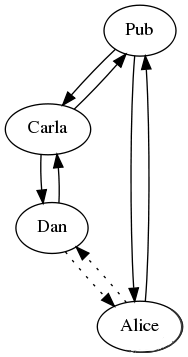 This is because gossip creates "transitive" connections between computers. Dan's messages travel through Carla and the Pub to reach Alice, and visa-versa.

SSB is hostless: each computer installs the same copy of software and has equal rights in the network. Devices discover each other over the LAN with multicast UDP and sync automatically.

To sync across the Internet, "Pub" nodes run at public IPs and follow users. They are essentially mail-bots which improve uptime and availability. Users generate invite-codes to command Pubs to follow their friends. The SSB team runs some Pubs, but anybody can create and introduce their own.

Imagine that we want to read from a feed for which we know the identity, but we're connected to a malicious Secure Scuttlebutt instance. As long as the malicious database does not have the private key:

Additionally there is a protection from the feed owner, through the blockchain. The previous content-hash them from changing the feed history after publishing, as a newly-created message wouldn't match the hash of later messages which were already replicated. This ensures the append-only constraint, and thus safe network convergence.